On December 18, we all left work early for a special evening with Marilyn. It was great to spend time with Mom & Dad at the Children's Museum. Surprisingly, Dad had never been! Thankfully he had a pint sized tour guide that was ready to show him around.

First we visited Santa. Marilyn was so excited to see him... from a distance. Once it was our turn, her infamous "shy hand" appeared. So I jumped in and posed with Santa as well. Mommies certainly have wish lists too... why not share it. Marilyn did inform Santa that she wanted a truck. As soon as we got up she yelled "BYE SANTA" and waved at him. She really likes him from the safe distance of more than a foot.

Next was the Jolly Slide... and yes, that is Grandpa with Marilyn. I love Marilyn's face after it was over... she just loved it!

At the train exhibit 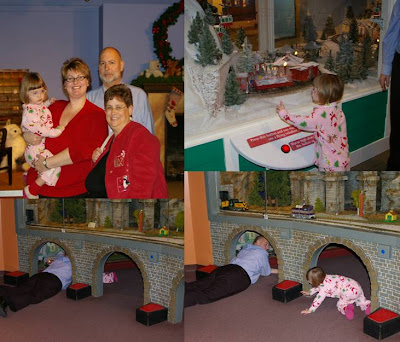 As you can see, they are like two peas in a pod.

Here on the Carousel.
After the Children's Museum, we went to the Iron Skillet for dinner, then drove downtown to look at the lights on the Circle. Then it was off to Christmas at the Zoo. Unfortunately, I was too chilled to take pictures at the Zoo. Marilyn was sad that so many of the animals were put away due to the cold. But the best part for me was her saying that she only wanted to "hold my Pappaw". Dad carried her through the entire zoo, and she didn't want anyone else. What a fun filled evening! Thanks Mom & Dad for the wonderful memories.
at 9:38 PM