On Friday after Thanksgiving, we headed to my parents' house to assist in the annual Christmas decorating fun. Thankfully, since Kate and Brett are staying there until they head out on their big adventure, they were able to get most of the decorating done before the littlest hands arrived to assist. Try as she might, Marilyn is not quite as helpful as she thinks.
Here are a few of her with her favorite dog bone and covered in tinsel. Yes, she plays with dog toys! Apparently, they work well for both teething babies and puppies. 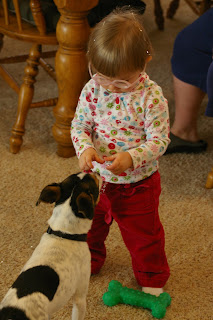 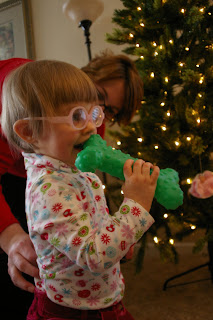 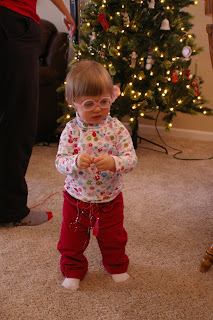 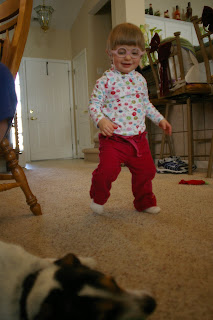 Thanksgiving, the perfect time to count our blessings and remember all for which we are thankful!

With Marilyn's recent positive prognosis, we are beyond grateful this year. Hunter and I continue to believe that God truly has Marilyn in his hands and is guiding the doctors and their courses of treatment. There has been no greater excitement than to hear that her pressures are good and that she is on the right track.

We are thankful for Riley and to the staff of doctors, nurses and fellows who have taken a special interest in our little Marilyn. We are so blessed to be so close to this amazing hospital. We are grateful to our families, friends, acquaintances and even strangers that hold our Marilyn in their prayers. It boggles my mind and warms my heart to hear of so many people that have heard of Marilyn and lift her up in prayer. I know these prayers have been heard and will continue to be.

On this Thanksgiving, we are so grateful for your prayers and warm wishes and thank you from the bottom of our hearts. Happy Thanksgiving! 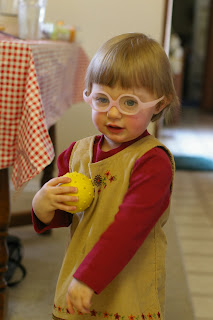 Marilyn at the Brenton Thanksgiving 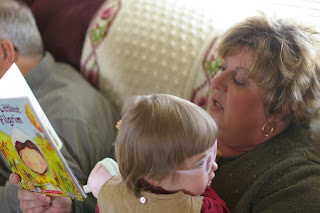 Marilyn and Great-Aunt Ronna reading The Littlest Pilgrim. Our Marilyn prefers books to all else and will sit and read for hours.
at 12:16 AM No comments:

We are so very happy to report on Marilyn's eye exam today. She was seen at Riley this morning for an EUA to check her pressures and the valve placement. The doctor came out and said that everything looks great!!!!

Her pressures are BOTH NORMAL!!!!

He said that her optic nerves look good and the valve in her left eye is in perfect placement. We are so very very happy!!! I am elated just writing this. I feel like this is my birthday wish come true and the answer to so many prayers.

Thank you, thank you, thank you for your continued prayers and support. God is so good! Marilyn will return to Riley for an office exam in December and then will continue to be monitored, so please keep up the prayers, they are obviously being heard!
at 1:47 PM 3 comments:

Since you must be asking... how are Marilyn's eyes? I will give an update.

Marilyn underwent surgery on October 14. At that time her pressure was still much too high in the left eye, and it had experienced significant growth since her last exam. The doctors decided it was time to get more aggressive.

They implanted an Ahmed Glaucoma Valve in her left eye which is designed to serve as a secondary drain for the excessive pressure and release the fluid into her blood vessels. The procedure took about two hours, and they came out with the highest of hopes.

Unfortunately, there are numerous complications that can be associated with an artificial valve of this nature, such as infection, dislocation or cataracts. But so far she has done very well. We returned to Riley today for her two week post-op exam, and it looks great. The blood has nearly all disipated from her eye, and she is doing very well.

The doctors have some concern that her left eye prescription is worsening. With already such a significant loss of vision, there is the concern that the eye may not be capable of seeing. Once the pressure is under control, they will begin the process of salvaging her left eye's vision. The wonderful part is that she sees great with the glasses, and she leaves them alone! Thankfully she was put in glasses at such an early age that now she knows no alternative.

As Marilyn had her one year anniversary as a Riley patient, we are still full of hope! Marilyn's right eye is still doing great! Please keep her in your prayers as we continue to regulate her left eye pressure. She returns to Riley for another EUA on November 18th.
at 4:04 PM No comments:

On October 26, after a month of bedrest for me... we headed to Zoo Boo! It was such a beautiful day. We were joined by Aunt Kate, Uncle Brett and Grandma Brenton. Here are a few of our cute little ladybug! 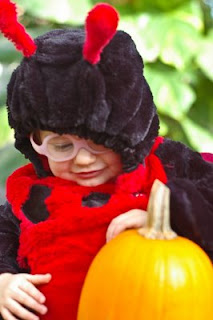 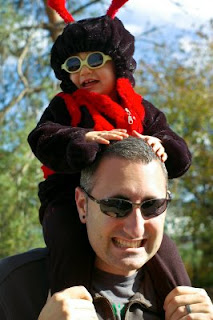 Marilyn and Daddy, what a pair! 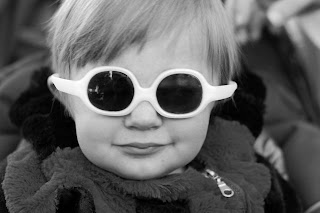 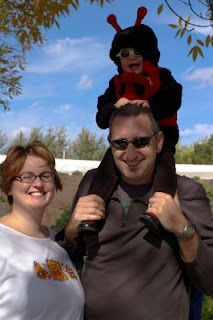 I am not sure if you can tell through her sunglasses, but Marilyn is sound asleep. She fell asleep as we were walking the zoo and did not budge when we loaded her in the car. She had a blast at her second Zoo Boo! 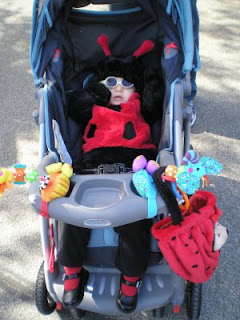 We are saddened to say that our family has suffered the loss of Hunter's maternal Grandmother, Mary Elizabeth Slater.

Grandmommie, as she was known, passed away on September 27th and services were held in Knoxville, TN on October 17 & 18. Thankfully the services were held at a later date to accommodate the Priest's schedule. This also allowed my tailbone some time to heal before embarking on the 6 hour road trip. We traveled to Knoxville and celebrated the life of Great-Grandma Mary. Even at 92, she maintained her vibrant personality and unconditional love for her family. She will be greatly missed.
During our time in Knoxville, we were able to visit with Grandma Jane and Grandpa Don, as well as Aunt Lizzie & Uncle Chris. With Hunter's family scattered around, it was wonderful to have the whole family together. We are so grateful we were all able to attend.
While staying at the hotel in Knoxville, Hunter and Marilyn enjoyed some time in the pool. (I was resting on a heating pad in bed...) Here are a few pictures Aunt Lizzie took of Marilyn in the pool. They are absolutely precious! 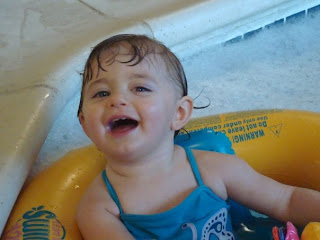 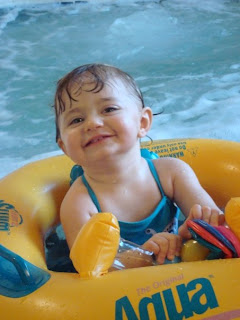 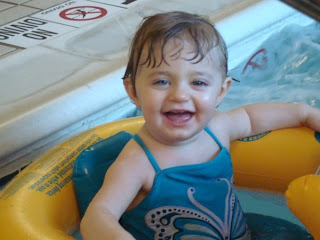 Here are a few of her back in the room... she loves the water so much she did not want to leave her floaty boat. Perhaps she will be a great swimmer like her Daddy, Aunt Lizzie & Uncle Chris. 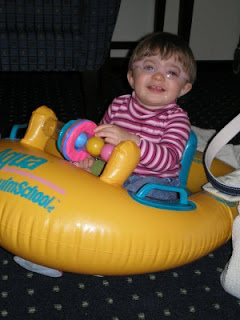 All wiped out, with her blankie and her baby. 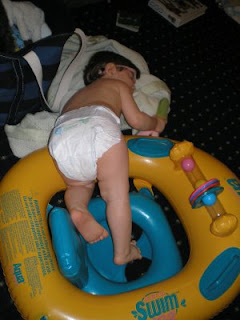 Catching Up- The Pumpkin Patch

Unfortunately, on September 25 I slipped and fell, cracking and bruising my tailbone. This led to three weeks of bedrest! A major bummer considering how much I love fall. I am finally feeling better but was forced to take it easy for most of October.

However in mid October, on one gorgeous fall day, we did venture out of the house. We headed to Anderson Orchard's pumpkin patch. Due to the pain, the trip was short, but I just had to see Marilyn in the pumpkin patch. Last year she was only 4 weeks old... so this was a major change. She walked through the field and played the pumpkins like drums... too cute! 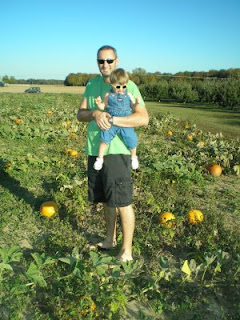 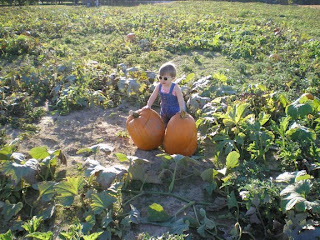 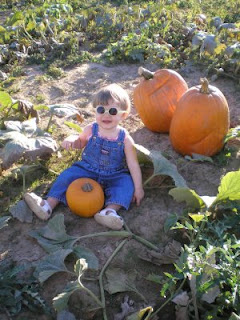 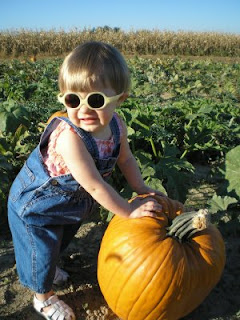 Whew, Catching Up - The Zoo

Unfortunately, September and October both flew by without the proper blog updates, so I will now attempt to catch up. Back on September 20, we headed to the Indianapolis Zoo with Aunt Kate, Uncle Brett, Grandma & Grandpa Brenton. Marilyn's smiles were captured by both Uncle Brett and Grandpa (as Grandpa prepares to replace Uncle Brett's snapshots). Here are a few from that beautiful sunny day. 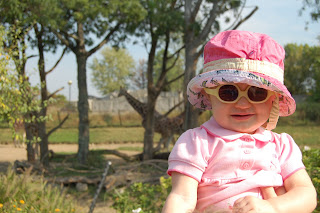 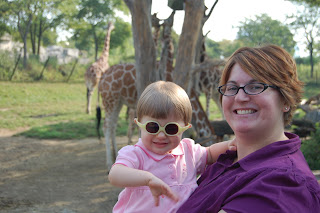 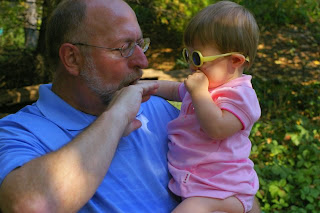 Marilyn has developed a "Grandpa call". She puts her hand over her mouth and moves it back and forth to create the fun noise. Grandpa then makes the same noise with his mouth, and they go back and forth. It was so fun to see Marilyn do her "Grandpa call" and then hear Dad echo back from within the zoo. This happens every time she sees him!
at 2:35 PM No comments: