On Christmas Eve, we celebrate with my parents and Kate & Brett. Mostly, this is because we can't wait to open presents on Christmas morning. When I say, "we" I really mean "me". I am not sure if it is a genetic trait or not, but I get sooooo excited I can't sleep. But my Dad is the same way, and even my Aunt Ronna (his sister- she is usually up before 5am!) so with such an excited bunch (Dad & me particularly), we exchange our gifts on Christmas Eve. This comes after years of EARLY, EARLY morning and sleepless nights, finally we just gave in to the urge, and now it is our ritual.

Marilyn and I spent the day at Dad & Mom's lounging and enjoying quality time with my soon-to-be world traveling sister and brother-in-law. I am going to miss them so much I can't even explain... so I won't even attempt. Anyway, I am trying to spend as much time with them as possible before they leave and Christmas Eve was no exception. Here are some from our Christmas Eve. 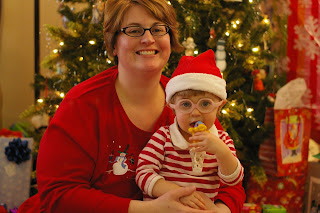 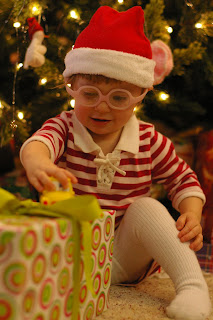 Marilyn loved the ribbons and bows more than anything. She eventually wound up wearing this one as a belt and the bows in her hair. 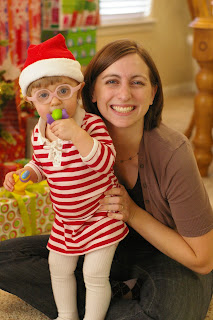 What a pair! Marilyn's eyes light up when she sees Aunt Kate, and there is NO ONE she would rather be with... no one compares to her love for Aunt Kate. 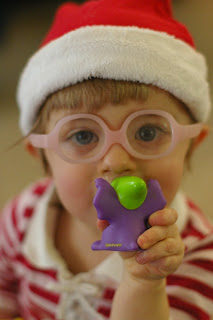 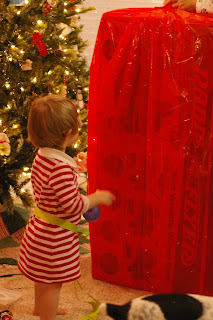 Marilyn sizing up her very large new wagon from Grandpa & Grandma! It even has a sun canopy for her sensitive eyes! It will be perfect for the zoo membership we received from Kate & Brett! 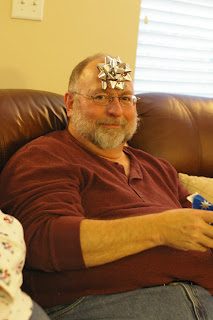 I couldn't resist posting this one! Can you tell Grandpa loves Christmas?!? He wore a Santa hat around the house on Christmas Eve and Marilyn kept looking at him and cocking her head. She would not cuddle with him until he removed the hat and gave his Grandpa call. Too funny, she may think Grandpa really is Santa Claus! 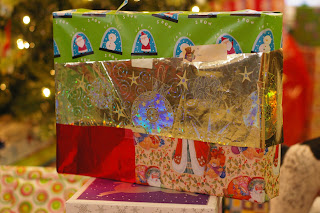 Kate used up all the old scraps from the wrapping bin and made this beautiful Christmas quilt. She's so crafty... ha! 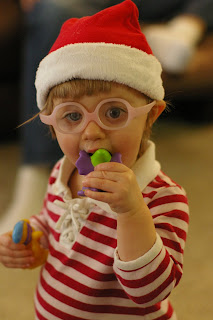 It was a glorious night. Not because of the gifts exchanged but because of the company we kept. Having our family together is priceless and knowing that it won't be possible in the near future makes it even more precious now.

When we became a family of seven, and this precocious little angel entered our world; the dynamics of our family shifted and Christmas became magical again. Having a toddler around and seeing the magic of the season through her eyes reminds me that the best gifts are the people seated around us and that the gift of love shared between us is far better than anything wrapped beneath the tree.

We had a fantastic time celebrating Christmas with you. Marilyn certainly is a joy, and incorporating her into holiday traditions has been fun. Marilyn was very cute in her candy cane outfit, but you'll probably have to get a bigger hat for next year.
-Brett

I have to agree...Christmas is better when seen through the eyes of a child! Glad you and your family had a wonderful Christmas.
Aunt Debbie(K)